William Booth was born on 10th April 1829 at 12 Nottintone Place in the Nottingham suburb of Sneinton. At the age of thirteen he was apprenticed to Pawnbroker Francis Eames in Nottingham's Goose Gate. His own religious upbringing was somewhat sketchy to say the least, although his father insisted he attended church regularly for appearances sake. As a teenager he was won to the Methodists.

Booths conversion was simple and undramatic. Around eleven o’clock one night in 1884, trudging home from a meeting through unpaved streets, a sudden spiritual exaltation flooded his whole being. He saw with unmistakable clarity that he must renounce sin, all and every sin, and atone to others for the wrong he had done them.

From the first it was the plight of the poor that moved William Booth. Along with his friend William Sansom he trod in Wesley's footsteps by carrying the war against sin and misery into the open air. A small cottage in Kid Street, Nottingham was the venue for his first sermon, an inverted box flanked by candles serving as a lectern.

At the age of nineteen his six-year apprenticeship came to an end and Booth joined the swelling ranks of the unemployed. At this stage of his life the thought of being other than a lay-preacher never occurred to him. Twelve fruitless months later he decided, like so many provincial lads, to seek his fortune in London. there William Booth found only one vocation open to him; the pawn broking business. He moved into bed and board over his employers shop in Walworth. He continued to preach, and just as in Nottingham his sermons struck a jarring note with the well-to-do congregation of the Walworth Chapel.

Despite Booths conviction that thousands of unsaved men and woman passed daily into eternal damnation, the feeling grew that he was a reformer whose presence spelt trouble. His refusal to give up open air preaching led to the chapel declining to renew the ticket that every Methodist preacher needed to retain church membership. Persuaded by Edward Harris Rabbits, William Booth left his job at the pawnbrokers and became a full-time evangelist. With Rabbits financial support he set about transforming his congregations with renewed gusto.

On April 10 1852 Rabbits coaxed Booth to a meeting of the Reformers in Cowper Street, off City Road. That afternoon, his 23rd birthday, he met and fell in love with Catherine Mumford. Late that year, after obtaining her parents willing permission, William and Catherine were engaged. That same year the Reformers gave Booth charge of the Spalding circuit, 100 miles away from London and Catherine.

The realisation that only by studying theology at a training college could Booth become an ordained minister resulted in Catherine persuading him to enrol at a course run by the Methodist New Connexion at Albany Road, Camperwell. William and Catherine were married at Stockwell New Chapel on June 6th 1855. Their honeymoon was in true Booth style. One week relaxing at Ryde on the Isle of White followed by a revivalist tour of Guernsey. At first the young couple had no settled home. Booth was now accepted as the Connexions travelling campaigner on a fixed stipend of two pounds a week.

In 1857 the Connexion cut short his travels and he was given charge of Brighouse in Yorkshire. The following year he became a fully ordained minister and was transferred to Gateshead, Newcastle upon Tyne. In 1861, in face of opposition to his desire to travel, Booth resigned from the Methodist New Connexion. Relying on support from sympathisers he again resumed the role of travelling evangelist. 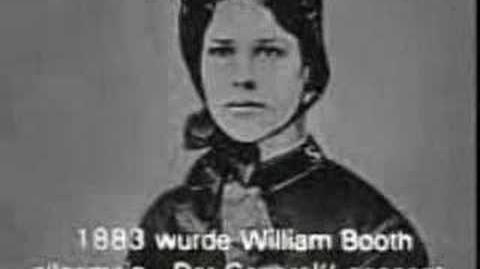 In 1865, at Catherine's urging, Booth started to preach in London. First in a tent at Thomas, now Falbourne, Street, then at Mile End Waste. Bible beneath his arm he preached outside The Vine and Blind Beggar public houses. Night after night he stumbled home, clothes torn, bandages around his head as a result of attacks made on him.

Later that year Booth founded the Christian Revival Association, which soon became known as the East London Christian mission. As stations were opened at Croydon and Bromley, Booth changed the name of his organisation to the Christian Mission. Other stations soon followed at Hastings and Tunbridge Wells. Headquarters were moved to 272 Whitechapel Road. By August 1877 William and Catherine's endeavours had established 26 flourishing stations.

It was Elijah Cadman who first referred to Booth as ‘General’ when they campaigned together in Whitby in the autumn of 1877. It was in May 1878 that the Christian Mission became known as The Salvation Army. George Scott Railton expressed his dislike of the Mission being referred to as a ‘Volunteer Army’, Booth took his pen and crossed out ‘Volunteer’ and substituted ‘Salvation’. The Army was exactly 88 strong.

By early 1879 William Booth was in command of 81 stations manned by 127 full-time evangelists with over 1,900 voluntary speakers holding 75,000 meetings a year. In 1878 alone 51 new stations had been opened. The Salvation Army soon spread overseas. On 10th March 1880 Commissioner Railton opened fire in the U.S.A. soon to be followed by the opening of work in France, Australia and India.

In 1886, inspired by a suggestion from Major John Carleton, Booth instituted the now familiar Self Denial Week. The first Self Denial Week, confined to the U.K., raised £4,820, a much needed boost for the depleted finances.

February 1888 saw Booth's beloved Catherine suffering with cancer. Her physician, Sir James Paget, recommended immediate and radical surgery, but Catherine refused. She made her last public appearance in June 1889 and was promoted to Glory on October 4th 1890.

Despite the death of his wife, Booth continued to work tirelessly for the benefit of the poor. ‘In Darkest England and the Way Out’, a blueprint setting out his ideas and plans for social reform was an overnight best seller. He opened a missing persons bureau, a labour bureau, a match factory, a farm colony, labour yards and an emigration service.

Despite his advancing years William Booth continued to campaign throughout the world. His last visit to the U.S.A. was in 1907, and in 1909 he embarked on a six-month motor tour of the United Kingdom. During this tour he discovered he was blind in his right eye and the sight in his left eye was dimmed by cataracts. The rest of the tour had to be cancelled. On August 21st 1909 a surgeon at Guys hospital removed his right eye. Despite this setback, in 1910 Booth campaigned in Holland, Denmark, Germany, Switzerland and Italy. On return to England he embarked on his seventh and last motor tour.

His last public appearance was on May 9 1912 at London's' Albert Hall where he addressed a gathering of 7,000 Salvationists. Two weeks later Booths left eye was operated on in an attempt to arrest his failing sight. Unfortunately the operation was not successful and he lost the battle for his sight.

Booths health was deteriorating rapidly, and on Sunday August 18 he lost consciousness. William Booth was promoted to Glory from his Hadley Wood home on August 20th 1912. At the three day lying in state at Clapton Congress Hall, 150,000 people filed past his casket. On August 27th Booths funeral service was held at London's Olympia. 40,000 people attended, including Queen Mary who sat almost unrecognised far to the rear of the great hall.

The following day Booths funeral procession set out from International Headquarters. As it moved off 10,000 uniformed Salvationists fell into step behind. The massed might of forty Salvation Army bands played the ‘Dead March’ from Handel's Saul as the vast procession headed for Abney Park Cemetery. General William Booth, the founder of The Salvation Army, made his last journey.