The Rën language (Zëw Rën /θeʋ ɾen/) is a constructed language used in Rën meditative practices. It is not intended to be a regularly used language in conversation, but rather as a tool to train the mind away from dualistic thought, dissolve self-identification with the mind, and inspire more objective examination of one's thought processes.

It necessarily identifies all self-aware beings as "Rën", including both animals and humans, and does not contain grammar to indicate relative time (ie tense-aspect), instead using a complex system of moods to state causality and the level and origin of the speaker's certainty of what they are saying.

In Rën philosophy, language is believed to be simultaneously the most important development separating humans and animals, and the cause of our loss of emotional connection with divine nonduality. For this reason, animals feature regularly within Rën poetry. While humans have developed a method of understanding and communicating complex concepts such as nonduality and ego death, through language we have also developed an identification with the mind, thus removing the innate awe and connection with Rën. The goal therefore of Rën may be said to merge that intellectual understanding with a regained sense of nonattachment and love of existence.

Consonants carry an inherent schwa that is deleted when the consonant may be analyzed in coda position, or when followed by a nuclear vowel.

The pharyngeal fricative ‹h› following a vowel is a suprasegmental, and may be analyzed as a fricative in coda position; or lengthening/gemination of the following consonant, or pharyngealization, or laryngealization (creaky voice) of the vowel idiolectically. It is commonly termed suprasegmantal H and the syllable in which it is found typically receives primary stress.

Rën is written using a cursive abugida. Consonants are written first as a single, unbroken line, after which the vowels are written over the consonantal base. Diacritics, such as the voicing curve (jal), palatalization ring (diara) and crown (tëj) for the vowel ‹ë› are written separately. 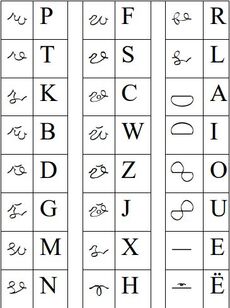 Rën is a typically SVO language, although the subject and object often appear reversed, as the unmarked voice is passive. Most grammaticalization is accomplished through inflection as well, causing the word order to be more flexible, especially in poetry.

Ren lacks animate nouns in a general sense, instead identifying descriptors of a referent. It differentiates between descriptors through indexing, with animate referents identified by the vowel quality on a syllable in the stem, along with marking for inanimate referents, impersonal referents, and omnipresent referent (Rën). Referential morphemes are vocalic infixes, with their position specific to the stem. All nouns and verbs have a place for the infix, and the infix's meaning changes depending on the class of the stem.

In nouns, it usually implies ownership. ie jeha "face" > jiaha "one's face", although in the case of ‹ë›, as nonduality may be considered either animate or inanimate, it can also be a state of existence. ie jëha "Rën is a face"

Vowel qualities allowed for the infix are always either monophthongs with suprasegmental H, or else diphthongs allowed in the language (‹au›‹oa›‹ia›‹io›‹iu›). The exception is the vowel ‹ë›, which is only used to denote a level of universality or divinity to the root term.

Rën uses a form of grammatical mood that is used to identify precursors or causes for statements, as well as levels of certainty of the speaker regarding both the statement and the reason it is being made. Mood suffixes typically attach to the primary verb of a sentence. As adjectives are inseparable from intransitive verbs in Rën, mood is sometimes the only way in which the primary verb of a sentence is established.

The declarative mood in Rën is marked with a pharyngealization upon a word-final consonant, written as a suprasegmental H. In a word that ends in a vowel, it is not denoted verbally or in writing. It holds more weight than the declarative of most languages, as it implies that the speaker is not only certain of what they are saying, but also of the reason they are saying it. For example, the declarative is not used with news or hearsay.

The interrogative is written as a particle beginning a sentence, as ke or ki. It is not always necessarily asking a question, and may be used rhetorically, simply stating that something is not known, and that one has no cause to believe or disbelieve in its truth.

The causative mood is expressed with a suffix ki attached to the cause itself. It implies a certainty, and direct causal relationship between antecedent and consequent.

Like the causative, the conditional is a suffix (ir) that goes on the antecedent. It may, however, be used in a statement without consequent to imply that one is uncertain of whether or not something has, or will take place, and has only an idea of what may occur or have occurred as a result.

This mood can be thought of as the opposite of the conditional. The presumptive is a declarative statement that confesses that it does not know or care about the cause. Its suffix is icir.

The energetic states that one is certain of a cause, therefore they expect something to happen. It can be used for imperatives. The suffix is mi or më.

The optative expresses wishes, desires, or wistful thinking. It admits that while something may or may not happen, that the reasoning behind it has not been considered at all. The suffix is wi.

The potential expresses that something may or may not happen. It gives no weight of certainty to the statement, but indicates that there is cause to believe one way or another. The suffix is ci.

The inferential states that one is certain of the occurrence or eventuality of something, but that they are not entirely certain of the cause — that it has not been personally verified. The suffix is is.

The sacred and strictly non-dualistic nature of the Rën language requires its speakers to hold certain conventions and taboos when speaking or writing in the language.

While it is possible to identify an animate noun through a thorough description of it using verbal descriptors — for example, a "cat" may be identified as "having fur", "quiet", "quadrupedal", and "sheathing its claws", to do so without very good reason should be considered inappropriate. One who insists on using such descriptors without good reason may come across as materialistic or judgmental.

The word Rën, even when inflected to indicate an individual being, has a reverential connotation. It is often used as a vocative to get someone's attention, or in polite conversation to indicate firstly, that one is speaking the Rën language; second, the veneration of Rën; and third, the vocalic variable assigned to the listener. It does not need to be reciprocated by the listener. As such, the word should not be frequently used in conversation outside of a specifically sacred context, and effort should be made to imply animate tokens through verbal agreement (via infixation) or through context. One who overuses the word Rën may come across as irreverent or egotistical.

The vowel letter ‹ë› takes on some of this taboo, as it represents the irreferable, or Rën itself. It is used in relatively few root words, and is never found in diphthongs or aspirations, and is always stressed.

Rën grammar frequently has a null-subject, making evasion of the word relatively simple. However, especially when referring to autonomic, physiological processes, the word om- "body", or other grammatically inanimate body parts, may be used in subject position in place of Rën-. Similarly, thoughts and beliefs that are taboo, undesirable, or automatic may be given the subject -ra "mind".

Retrieved from "https://religion.wikia.org/wiki/Rën_language?oldid=288980"
Community content is available under CC-BY-SA unless otherwise noted.