Gregory of Nazianzus (330 – January 25 389 or 390) (also known as Gregory the Theologian or Gregory Nazianzen) was a 4th-century Archbishop of Constantinople. He is widely considered the most accomplished rhetorical stylist of the patristic age. As a classically trained speaker and philosopher he infused Hellenism into the early church, establishing the paradigm of Byzantine theologians and church officials.

Gregory made a significant impact on the shape of Trinitarian theology among both Greek- and Latin-speaking theologians, and he is remembered as the "Trinitarian Theologian". Much of his theological work continues to influence modern theologians, especially in regard to the relationship among the three Persons of the Trinity. Along with two brothers, Basil the Great and Gregory of Nyssa, he is known as one of the Cappadocian Fathers.

Gregory is a saint in both Eastern and Western Christianity. In the Roman Catholic Church he is among the Doctors of the Church; in Eastern Orthodoxy he is revered as one of the Three Holy Hierarchs, along with Basil the Great and John Chrysostom. 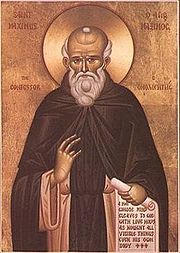 Saint Maximus the Confessor (also known as Maximus the Theologian and Maximus of Constantinople) (c. 580 – 13 August 662) was a Christian monk, theologian, and scholar. In his early life, he was a civil servant, and an aide to the Byzantine Emperor Heraclius. However, he gave up this life in the political sphere to enter into the monastic life.

After moving to Carthage, Maximus studied several Neo-Platonist writers and became a prominent author. When one of his friends began espousing the Christological position known as Monothelitism, Maximus was drawn into the controversy, in which he supported the Chalcedonian position that Jesus had both a human and a divine will. Maximus is venerated in both Eastern Christianity and Western Christianity. His positions eventually resulted in exile, soon after which he died. Maximus is among those Christians who were venerated as saints shortly after their deaths. The vindication of Maximus' theological position at the Third Council of Constantinople made him extremely popular within a generation after his death, and his cause was aided by the accounts of miracles at his tomb. In Eastern Christianity, Maximus has always been influential. The Eastern theologians Simeon the New Theologian and Gregory Palamas are seen as intellectual heirs to Maximus. Further, a number of Maximus' works are included in the Greek Philokalia - a collection of some of the most influential Greek Christian writers.

Pilate's wife, Saint Prokla (right), in a Greek Orthodox icon.
Pontius Pilate's wife is unnamed in the New Testament, where she appears a single time in the Gospel of Matthew. Alternate Christian traditions named her (Saint) Procula, Proculla, Procla, Prokla, Procle or Claudia. Also combinations like Claudia Procles or Claudia Procula are used. No verifiable biography exists on the life of Pilate’s wife. Details of her life are surmised from Christian legend and tradition. In the New Testament, the only reference to Pilate’s wife exists in a single sentence by Matthew. According to the Gospel of Matthew 27:19, she sent a message to her husband asking him not to condemn Jesus Christ to death: ‘While Pilate was sitting in the judgment hall, his wife sent him a message: “Have nothing to do with that innocent man, because in a dream last night, I suffered much on account of him.” Procula (Procla, Prokla) is recognized as a saint in two churches within the Eastern Christian tradition: the Eastern Orthodox Church and the Ethiopian Orthodox Church. In the Eastern Orthodox Church, she is celebrated on 27 October. The Ethiopian Orthodox Church celebrates Pilate and Procula together on 25 June. 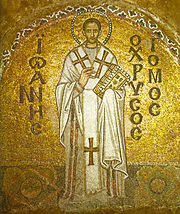 Saint John Chrysostom (c. 347–407, Greek: Ιωάννης ο Χρυσόστομος), archbishop of Constantinople, was an important Early Church Father. He is known for his eloquence in preaching and public speaking, his denunciation of abuse of authority by both ecclesiastical and political leaders, the Divine Liturgy of St. John Chrysostom, and his ascetic sensibilities. After his death (or, according to some sources, during his life) he was given the Greek surname chrysostomos, meaning "golden mouthed", rendered in English as Chrysostom.

The Eastern Orthodox Church honors him as a saint (feast days: November 13 and January 27) and count him among the Three Holy Hierarchs (feast day, January 30), together with Saints Basil the Great and Gregory Nazianzus. Churches of the Western tradition, including some Anglican provinces and parts of the Lutheran Church, commemorate him on September 13. The Coptic Orthodox Church of Alexandria recognizes John Chrysostom as a saint (feast days: 16 Thout and 17 Hathor).

Chrysostom is known in Christianity chiefly as a preacher, theologian and liturgist, particularly in the Eastern Orthodox Church. Among his sermons, eight directed against the Jews remain controversial for their impact on the development of Christian antisemitism. 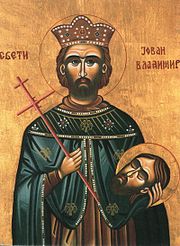 Jovan Vladimir in English texts often John Vladimir, (died May 22, 1016 in Prespa, today in the Republic of Macedonia) was the ruler of Duklja between the years ca. 990 and 1016, during the protracted war between Byzantium and the First Bulgarian Empire. He tried to protect Duklja from the expansionist Tsar Samuil of Bulgaria by making alliance with Byzantium; Samuil, however, conquered Duklja in 997 and took Jovan Vladimir prisoner. Samuil’s daughter Theodora Kosara fell in love with the captive, and begged her father for his hand. He obliged, returning Duklja to his new son-in-law and giving him the territory of Dyrrhachium besides, to rule them as his vassal. Vladimir ruled in peace, evading involvement in the major conflict. The war culminated with Samuil’s defeat by the Byzantines in 1014, shortly after which the Tsar died. Jovan Vladimir finally fell victim in 1016 to a plot by Ivan Vladislav, the last ruler of the First Bulgarian empire. He was beheaded in front of a church in Prespa. Jovan Vladimir was buried in Prespa, and shortly after his death he was recognized as a martyr and saint, being celebrated on May 22; he is chronologically the first Serbian saint. To the present day, the relics of Saint Jovan Vladimir attract many believers, especially on his feast day. One relic connected with the saint is the cross that he held in his hands when he was beheaded. Saint Jovan Vladimir is the patron saint of the town Bar, Montenegro.

Although Zoghby's proposal of double communion has not been accepted by Rome or the Orthodox Church, the initiative focused greater attention on ecumenical discussions and renewed efforts for East–West unity. Zoghby also suggested a solution which considers adultery and abandonment as causes for the dissolution of marriage. Melkite Patriarch Maximos IV declared that, while "Archbishop Zoghby, like all Fathers of the council, enjoys full freedom to say what he thinks ... [Zoghby] speaks only for himself personally. With respect to the heart of the problem, the Church must hold fast to the indissolubility of marriage." Critics labeled him the enfant terrible of his church, while supporters lauded him as an energetic visionary who sought to re-unite the Eastern Churches. 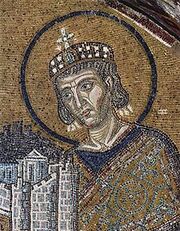 Flavius Valerius Aurelius Constantinus (27 February c. 272 – 22 May 337), commonly known in English as Constantine I, Constantine the Great, or (among Eastern Orthodox, Oriental Orthodox and other Christians) Saint Constantine, was Roman Emperor from 306, and the undisputed holder of that office from 324 until his death in 337. Best known for being the first Christian Roman Emperor, Constantine reversed the persecutions of his predecessor, Diocletian, and issued (with his co-emperor Licinius) the Edict of Milan in 313, which proclaimed religious toleration throughout the empire.

The Byzantine liturgical calendar, observed by the Eastern Orthodox Church and some Churches in union with Rome, lists both Constantine and his mother Helena as saints. In the West, he is revered under the title "The Great" for his contributions to Christianity. Constantine also transformed the ancient Greek colony of Byzantium into a new imperial residence, Constantinople, which would remain the capital of the Byzantine Empire for over a thousand years. 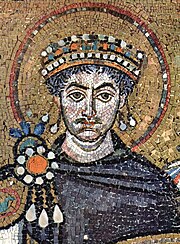 Saint Justinian, 482 or 483 CE – 13 or 14 November 565, was the second member of the Justinian Dynasty (after his uncle, Justin I) and Eastern Roman Emperor from 527 until his death. He is considered a saint amongst Eastern Orthodox Christians, and is also commemorated by the Lutheran Church. One of the most important figures of Late Antiquity, Justinian's rule constitutes a distinct epoch in the history of the Byzantine Empire. The impact of his administration extended far beyond the boundaries of his time and empire. Justinian's reign is marked by the ambitious but ultimately failed renovatio imperii, or "restoration of the empire". This ambition was expressed in the partial recovery of the territories of the Western Roman Empire, including the city of Rome itself. A still more resonant aspect of his legacy was the uniform rewriting of Roman law, the Corpus Juris Civilis, which is still the basis of civil law in many modern states. His reign also marked a blossoming of Byzantine culture, and his building program yielded such masterpieces as the church of Hagia Sophia, which was to be the center of Eastern Orthodox Christianity for many centuries. A devastating outbreak of bubonic plague in the early 540s marked the end of an age of splendor. The empire entered a period of territorial decline not to be reversed until the ninth century.

Yaropolk Izyaslavich (died 1087) was a Knyaz (prince) in eleventh-century Kievan Rus. The son of Grand Prince Izyaslav Yaroslavich by a Polish princess named Gertruda, he is visible in papal sources by the early 1070s but largely absent in contemporary Rus'ian sources until the year of his father's death, 1078. During his father's exile in the 1070s, Yaropolk can be found acting on his father's behalf in an attempt to gain the favor of the German emperors and the court of Pope Gregory VII. Yaropolk followed his father when the latter returned to Kiev in 1077.

After his father's death in the folloing year, 1078, Yaropolk was appointed Prince of Vladimir-in-Volhynia and Prince of Turov by the new Grand Prince, his uncle Vsevolod. By 1085 however, Yaropolk had fallen into a state of enmity with the Grand Prince and by extension the Grand Prince's son Vladimir Monomakh, forcing him to flee from his principality to his mother's homeland, Poland. He returned in the following year, but was soon murdered. He was remembered in Rus'ian sources as extremely pious and generous to the church, and is recognized as a saint in the Eastern Orthodox Church. He was said to have left all his wealth to the Monastery of the Caves in Kiev. The Primary Chronicle's eulogy is the first indication of saintly regard, and indeed today he is venerated as a saint in the Eastern Orthodox Church, with his feast day falling on the reported day of his death, November 22.

Choose the next "Selected article":

Retrieved from "https://religion.wikia.org/wiki/Portal:Eastern_Christianity/Bio_Archive?oldid=70324"
Community content is available under CC-BY-SA unless otherwise noted.