This article is about the ancient town and university. For other uses, see Nalanda (disambiguation).

Nālandā (Hindi: नालंदा) is the name of an ancient university in Bihar, India. The site of Nalanda is located in the Indian state of Bihar, about 55 miles south east of Patna, and was a Buddhist center of learning from 427 to 1197 CE.[1][2] It has been called "one of the first great universities in recorded history."[2] Some parts of Nalanda university were constructed by the Mauryan emperor Ashoka the Great e.g. the Sariputta Stupa and by Tamil emperor Rajaraja Chola. The Gupta Dynasty also patronized some monasteries. According to historians, Nalanda flourished between 427 CE and 1197 CE, mainly on account of patronage of Buddhist Emperors like Harshavardhana, Pandyas of Pandyan Dynasty and Pala kings of Pala dynasty. The ruins of Nalanda University occupy an area of 14 hectares. This university was completely built with red bricks. At its peak, Nalanda University attracted scholars and students from many parts of the globe e.g. China, Greece etc.

Nalanda was identified by Alexander Cunningham with the village of Baragaon.[3]

The Chinese pilgrim-monk Xuanzang[5] gives several explanations of the name Nālandā. One is that it was named after the Nāga who lived in a tank in the middle of the mango grove. Another – the one he accepted – is that Shakyamuni Buddha once had his capital here and gave "alms without intermission", hence the name.

Sariputta died at the village called 'Nalaka,' which is also identified as Nalanda by many scholars.

The Buddha is mentioned as having several times stayed at Nalanda. When he visited Nalanda he would usually reside in Pāvārika's mango grove, and while there he had discussions with Upāli-Gahapati and Dīghatapassī,[6] with Kevatta,[7] and also several conversations with Asibandhakaputta.[8]

The Buddha visited Nālandā during his last tour through Magadha, and it was there that Sariputta uttered his "lion's roar," affirming his faith in the Buddha, shortly before his death.[9] The road from Rājagaha to Nālandā passed through Ambalatthikā,[10] and from Nālandā it went on to Pātaligāma.[11] Between Rājagaha and Nālandā was situated the Bahuputta cetiya.[12]

According to the Kevatta Sutta,[13] in the Buddha's time Nālandā was already an influential and prosperous town, thickly populated, though it was not until later that it became the centre of learning for which it afterwards became famous. There is a record in the Samyutta Nikaya,[14] of the town having been the victim of a severe famine during the Buddha's time. Sāriputta, the right hand disciple of the Buddha, was born and died in Nālandā.[1]

Nālandā was the residence of Sonnadinnā.[15] Mahavira is several times mentioned as staying at Nālandā, which was evidently a centre of activity of the Jains. Mahavira is believed to have attained Moksha at Pavapuri, which is located in Nalanda (also according to one sect of Jainism he was born in the nearby village called Kundalpur).

King Asoka (250 BC) is said to have built a stupa in the memory of Sariputta. According to Tibetan sources, Nagarjuna taught there.[16]

Foundation of Nalanda University and the Gupta heyday

Historical studies indicate that the University of Nalanda was established 450 CE under the patronage of the Gupta emperors, notably Kumaragupta.[1]

As historian Sukumar Dutt describes it, the history of Nalanda university "falls into two main divisions--first, one of growth, development and fruition from the sixth century to the ninth, when it was dominated by the liberal cultural traditions inherited from the Gutpa age; the second, one of gradual decline and final dissolution from the ninth century to the thirteen--a period when the tantric developments of Buddhism became most pronounced in eastern India."[17]

Nalanda in the Pāla era

A number of monasteries grew up during the Pāla period in ancient Bengal and Magadha. According to Tibetan sources, five great Mahaviharas stood out: Vikramashila, the premier university of the era; Nalanda, past its prime but still illustrious, Somapura, Odantapurā, and Jaggadala.[18] The five monasteries formed a network; "all of them were under state supervision" and their existed "a system of co-ordination among them . . it seems from the evidence that the different seats of Buddhist learning that functioned in eastern India under the Pāla were regarded together as forming a network, an interlinked group of institutions," and it was common for great scholars to move easily from position to position among them.[19]

During the Pālā period the Nālānda was less singularly outstanding, as other Pāla establishments "must have drawn away a number of learned monks from Nālānda when all of them . . came under the aegis of the Pālās."[17]

In 1193, the Nalanda University was sacked by Bakhtiyar Khilji, a Turk;[20] this event is seen by scholars as a late milestone in the decline of Buddhism in India. Khilji is said to have asked if there was a copy of the Koran at Nalanda before he sacked it. The Persian historian Minhaj-i-Siraj, in his chronicle the Tabaquat-I-Nasiri, reported that thousands of monks were burned alive and thousands beheaded as Khilji tried his best to uproot Buddhism and plant Islam by the sword;[21] the burning of the library continued for several months and "smoke from the burning manuscripts hung for days like a dark pall over the low hills."[22]

The last throne-holder of Nalanda, Shakyashribhadra, fled to Tibet in 1204 CE at the invitation of the Tibetan translator Tropu Lotsawa (Khro-phu Lo-tsa-ba Byams-pa dpal). In Tibet he started an ordination lineage of the Mulasarvastivadin lineage to complement the two existing ones.

When the Tibetan translator Chag Lotsawa (Chag Lo-tsa-ba, 1197–1264) visited the site in 1235, he found it damaged and looted, with a 90-year-old teacher, Rahula Shribhadra, instructing a class of about 70 students.[23][24] During Chag Lotsawa's time there an incursion by Turkish soldiers caused the remaining students to flee.

Ahir considers the destruction of the temples, monasteries, centers of learning at Nalanda and northern India to be responsible for the demise of ancient Indian scientific thought in mathematics, astronomy, alchemy, and anatomy.[25]

Nalanda was one of the world's first residential universities, i.e., it had dormitories for students. It is also one of the most famous universities. In its heyday it accommodated over 10,000 students and 2,000 teachers. The university was considered an architectural masterpiece, and was marked by a lofty wall and one gate. Nalanda had eight separate compounds and ten temples, along with many other meditation halls and classrooms. On the grounds were lakes and parks. The library was located in a nine storied building where meticulous copies of texts were produced. The subjects taught at Nalanda University covered every field of learning, and it attracted pupils and scholars from Korea, Japan, China, Tibet, Indonesia, Persia and Turkey.[2]

The Tang Dynasty Chinese pilgrim Xuanzang left detailed accounts of the university in the 7th century. Xuanzang described how the regularly laid-out towers, forest of pavilions, harmikas and temples seemed to "soar above the mists in the sky" so that from their cells the monks "might witness the birth of the winds and clouds."[26]. Xuanzang states: "An azure pool winds around the monasteries, adorned with the full-blown cups of the blue lotus; the dazzling red flowers of the lovely kanaka hang here and there, and outside groves of mango trees offer the inhabitants their dense and protective shade."[27] Xuanzang also writes: "The lives of all these virtuous men were naturally governed by habits of the most solemn and strictest kind. Thus in the seven hundred years of the monastery's existence no man has ever contravened the rules of the discipline. The king showers it with the signs of his respect and veneration and has assigned the revenue from a hundred cities to pay for the maintenance of the religious."[28]

The entrance of many of the viharas in Nalanda University ruins can be seen with a bow marked floor; bow was the royal sign of Guptas'.

The library of Nalanda, known as Dharma Gunj (Mountain of Truth) or Dharmagañja (Treasury of Truth), was the most renowned repository of Buddhist knowledge in the world at the time. Its collection was said to comprise hundreds of thousands of volumes, so extensive that it burned for months when set aflame by Muslim invaders. The library had three main buildings as high as nine stories tall, Ratnasagara (Sea of Jewels), Ratnodadhi (Ocean of Jewels), and Ratnarañjaka (Delighter of Jewels)[29][30].

According to an unattributed article of the Dharma Fellowship (2005), the curriculum of Nalanda University at the time of Mañjuśrīmitra contained:

...virtually the entire range of world knowledge then available. Courses were drawn from every field of learning, Buddhist and Hindu, sacred and secular, foreign and native. Students studied science, astronomy, medicine, and logic as diligently as they applied themselves to metaphysics, philosophy, Samkhya, Yoga-shastra, the Veda, and the scriptures of Buddhism. They studied foreign philosophy likewise.

A vast amount of what came to comprise Tibetan Buddhism, both its sutric Mahayana traditions and its Vajrayana traditions, stems from the late (9th–12th century) Nalanda teachers and traditions. The scholar Dharmakirti (ca. 7th century), one of the Buddhist founders of Indian philosophical logic, as well as and one of the primary theorists of Buddhist atomism, taught at Nalanda.

Other forms of Buddhism, like the Mahayana followed in Vietnam, China, Korea and Japan, found their genesis within the walls of the ancient university.

Theravada Buddhism was also taught at Nalanda University, but its teachings were not developed further there, as Nalanda was not a strong center of Theravada. According to Hwui-Li, a Chinese visitor, Nalanda was held in contempt by some Theravadins for its emphasis on Mahayana philosophy. They reportedly chided King Harshavardhana for patronizing Nalanda during one of his visits to Orissa, mocking the "sky-flower" philosophy taught there and suggesting that he might as well patronize a Kapalika temple.[32]

A number of ruined structures survive. Nearby is the Surya Mandir, a Hindu temple. The known and excavated ruins extend over an area of about 150,000 square metres, although if Xuanzang's account of Nalanda's extent is correlated with present excavations, almost 90% of it remains unexcavated. Nālandā is no longer inhabited. Today the nearest habitation is a village called Bargaon.

In 1951, a modern centre for Pali (Theravadin) Buddhist studies was founded nearby by Bhikshu Jagdish Kashyap, the Nava Nalanda Mahavihara. Presently, this institute is pursuing an ambitious program of satellite imaging of the entire region.

The Nalanda Museum contains a number of manuscripts, and shows many examples of the items that have been excavated. India's first Multimedia Museum was opened on 26 January 2008, which recreates the history of Nalanda using a 3D animation film narrated by Shekhar Suman. Besides this there are four more sections in the Multimedia Museum: Geographical Perspective, Historical Perspective, Hall of Nalanda and Revival of Nalanda.

As they stood, before the Nalanda University was excavated.

Back side view of Sariputta Stupa 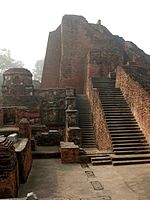 Front view of Sariputta Stupa
Add a photo to this gallery

Retrieved from "https://religion.wikia.org/wiki/Nalanda?oldid=32414"
Community content is available under CC-BY-SA unless otherwise noted.