In Buddhism, a bodhisattva (Sanskrit: बोधिसत्त्व bodhisattva; Pali: बोधिसत्त bodhisatta) is either an enlightened (bodhi) existence (sattva) or an enlightenment-being or, given the variant Sanskrit spelling satva rather than sattva, "heroic-minded one (satva) for enlightenment (bodhi)." Another term is "wisdom-being."[1] It is anyone who, motivated by great compassion, has generated bodhicitta, which is a spontaneous wish to attain Buddhahood for the benefit of all sentient beings.[2]

The bodhisattva is a popular subject in Buddhist art.

The term "bodhisatta" (Pāli language) was used by the Buddha in the Pāli canon to refer to himself both in his previous lives and as a young man in his current life, prior to his enlightenment, in the period during which he was working towards his own liberation. When, during his discourses, he recounts his experiences as a young aspirant, he regularly uses the phrase "When I was an unenlightened bodhisatta..." The term therefore connotes a being who is "bound for enlightenment", in other words, a person whose aim is to become fully enlightened. In the Pāli canon, the bodhisatta is also described as someone who is still subject to birth, illness, death, sorrow, defilement and delusion. Some of the previous lives of the Buddha as a bodhisattva are featured in the Jātaka tales.

In the Pāli canon, the bodhisatta Siddhartha Gotama is described thus:[3]

before my Awakening, when I was an unawakened bodhisatta, being subject myself to birth, sought what was likewise subject to birth. Being subject myself to aging... illness... death... sorrow... defilement, I sought [happiness in] what was likewise subject to illness... death... sorrow... defilement.
—Ariyapariyesana Sutta

While Maitreya (Pāli: Metteya) is mentioned in the Pāli canon, he is not referred to as a bodhisattva, but simply the next fully awakened Buddha to come into existence long after the current teachings of the Buddha are lost.

In later Theravāda literature, the term "bodhisatta" is used fairly frequently in the sense of someone on the path to liberation. The later tradition of commentary also recognizes the existence of two additional types of bodhisattas: the paccekabodhisatta who will attain Paccekabuddhahood, and the savakabodhisatta who will attain enlightenment as a disciple of a Buddha. According to the Theravāda teacher Bhikkhu Bodhi the bodhisattva path was not taught by Buddha [1].

Theravadin bhikku and scholar Walpola Rahula (Sri Rahula Maha Thera) has stated that the bodhisattva ideal has traditionally been held to be higher than the state of a śrāvaka not only in Mahāyāna, but also in Theravāda Buddhism. He also quotes an inscription from the 10th Century king of Sri Lanka, Mahinda IV (956-972 CE) who had the words inscribed "none but the bodhisattvas would become kings of Sri Lanka", among other examples.[4]

There is a wide-spread belief, particularly in the West, that the ideal of the Theravada, which they conveniently identify with Hinayana, is to become an Arahant while that of the Mahayana is to become a Bodhisattva and finally to attain the state of a Buddha. It must be categorically stated that this is incorrect. This idea was spread by some early Orientalists at a time when Buddhist studies were beginning in the West, and the others who followed them accepted it without taking the trouble to go into the problem by examining the texts and living traditions in Buddhist countries. But the fact is that both the Theravada and the Mahayana unanimously accept the Bodhisattva ideal as the highest.
—Walpola Rahula, Bodhisattva Ideal in Buddhism

Mahāyāna Buddhism is based principally upon the path of a bodhisattva. According to Jan Nattier, the term Mahāyāna ("Great Vehicle") was originally even an honorary synonym for Bodhisattvayāna, or the "Bodhisattva Vehicle."[5] The Aṣṭasāhasrikā Prajñāpāramitā Sūtra contains an simple and brief definition for the term bodhisattva, which is also the earliest known Mahāyāna definition.[6][7] This definition is given as the following.[8]

"Because he has enlightenment as his aim, a bodhisattva-mahāsattva is so called."

Mahāyāna Buddhism encourages everyone to become bodhisattvas and to take the bodhisattva vows. With these vows, one makes the promise to work for the complete enlightenment of all sentient beings by practicing the six perfections.[9] Indelibly entwined with the bodhisattva vow is merit transference (pariṇāmanā).

In Mahāyāna Buddhism life in this world is compared to people living in a house that is on fire. People take this world as reality pursuing worldly projects and pleasures without realising that the house is on fire and will soon burn down (due to the inevitability of death). A bodhisattva is one who has a determination to free sentient beings from samsara and its cycle of death, rebirth and suffering. This type of mind is known as the mind of awakening (bodhicitta). Bodhisattvas take bodhisattva vows in order to progress on the spiritual path towards buddhahood.

According to the doctrine of some Tibetan schools (like Theravāda but for different reasons), only the first of these is recognized. It is held that Buddhas remain in the world, able to help others, so there is no point in delay. Geshe Kelsang Gyatso notes:[10]

In reality, the second two types of bodhicitta are wishes that are impossible to fulfill because it is only possible to lead others to enlightenment once we have attained enlightenment ourself. Therefore, only king-like bodhicitta is actual bodhicitta. Je Tsongkhapa says that although the other Bodhisattvas wish for that which is impossible, their attitude is sublime and unmistaken.

The Nyingma school, however, holds that the lowest level is the way of the king, who primarily seeks his own benefit but who recognizes that his benefit depends crucially on that of his kingdom and his subjects. The middle level is the path of the boatman, who ferries his passengers across the river and simultaneously, of course, ferries himself as well. The highest level is that of the shepherd, who makes sure that all his sheep arrive safely ahead of him and places their welfare above his own.[11]

According to many traditions within Mahāyāna Buddhism, on the way to becoming a Buddha, a bodhisattva proceeds through ten, or sometimes fourteen, grounds or bhūmis. Below is the list of the ten bhūmis and their descriptions according to the Avataṃsaka Sūtra and The Jewel Ornament of Liberation, a treatise by Gampopa, an influential teacher of the Tibetan Kagyu school. (Other schools give slightly variant descriptions.)

Before a bodhisattva arrives at the first ground, he or she first must travel the first two of the five paths:

The chapter of ten grounds in the Avataṃsaka Sūtra refers to 52 stages. The 10 grounds are:

After the ten bhūmis, according to Mahāyāna Buddhism, one attains complete enlightenment and becomes a Buddha.

A bodhisattva above the 7th ground is called a mahāsattva. Some bodhisattvas such as Samantabhadra are also said to have already attained buddhahood.[15]

Various traditions within Buddhism believe in specific bodhisattvas. Some bodhisattvas appear across traditions, but due to language barriers may be seen as separate entities. For example, Tibetan Buddhists believe in various forms of Chenrezig, who is Avalokiteśvara in Sanskrit, Guanyin (Kwan-yin or Kuan-yin) in China and Korea, Quan Am in Vietnam, and Kannon (formerly spelled and pronounced: Kwannon) in Japan. Followers of Tibetan Buddhism consider the Dalai Lamas and the Karmapas to be an emanation of Chenrezig, the Bodhisattva of Compassion.

Kṣitigarbha is another popular bodhisattva in Japan and China. He is known for aiding those who are lost. His greatest compassionate vow is:

If I do not go to the hell to help the suffering beings there, who else will go? ... if the hells are not empty I will not become a Buddha. Only when all living beings have been saved, will I attain Bodhi.

The place of a bodhisattva's earthly deeds, such as the achievement of enlightenment or the acts of dharma, is known as a bodhimanda, and may be a site of pilgrimage. Many temples and monasteries are famous as bodhimandas; for instance, the island of Putuoshan, located off the coast of Ningbo, is venerated by Chinese Buddhists as the bodhimanda of Avalokiteśvara. Perhaps the most famous bodhimanda of all is the bodhi tree under which Śākyamuṇi achieved buddhahood. 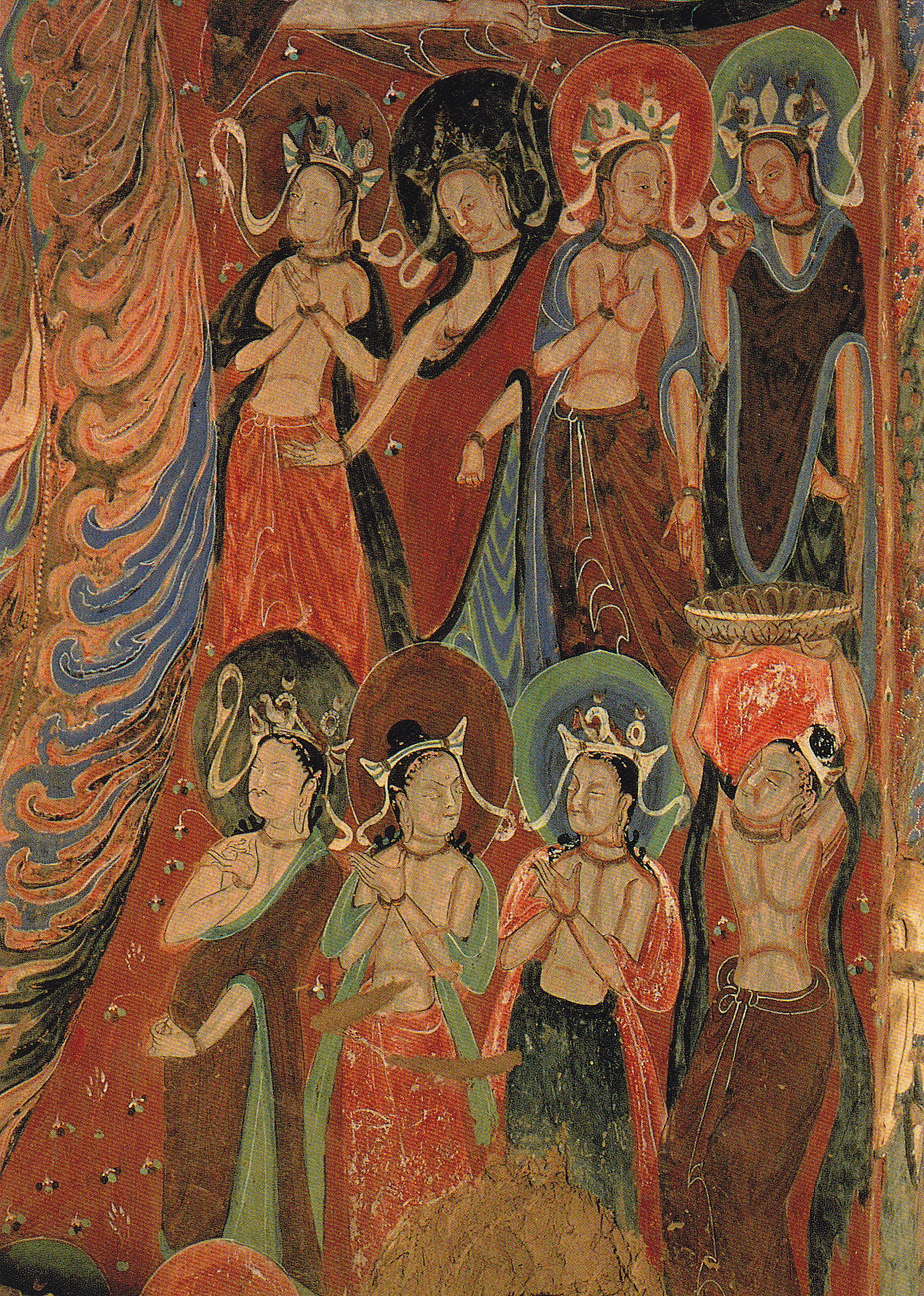 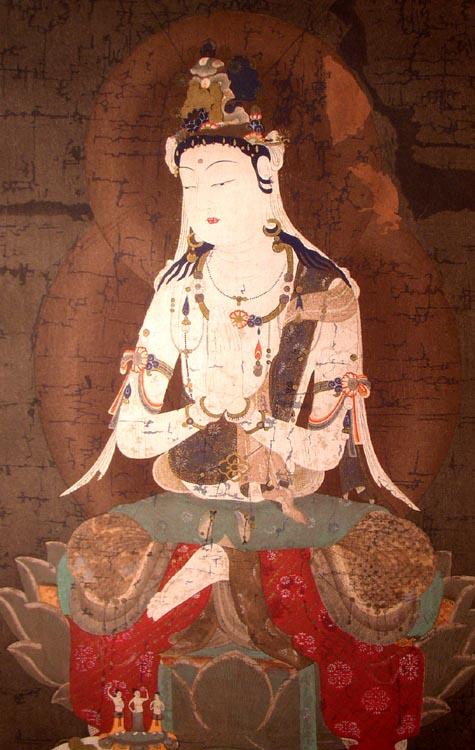 Maitreya Bodhisattva. Tibet.
Add a photo to this gallery

Retrieved from "https://religion.wikia.org/wiki/Bodhisattva?oldid=178892"
Community content is available under CC-BY-SA unless otherwise noted.