Translated out of the original tongues: and with the former translations diligently compared and revised by the King of England's special command, appointed to be read in churches. 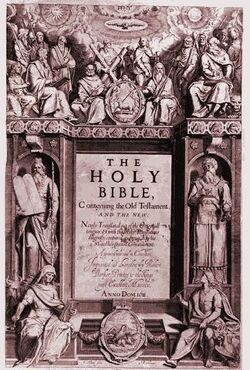 The Times of the Kings

The King James Bible was first published in 1611, as a standard English Bible to be used in the services of the Church of England according to the Book of Common Prayer. It gradually supplanted all other English bible versions, to become by the 19th century, the standard Bible text for English-speaking Protestants whether inside or outside the Anglican tradition. Almost all printings since the late 18th century have used this Oxford Standard text of 1769, which radically updates and standardises the spelling and printing of the original edition.

The Inter-Testament books are not now recognized as canonical by many Protestant and Para-Protestant Christian religious groups, which consider and call them "the Apocrypha". Nevertheless, they are recognized as a constituent part of the Biblical canon by the Roman Catholic Church, the Orthodox Christian Churches, and the Oriental Christian Churches, which consider and call most of them "the deuterocanonical books"; meaning "the books from the second canon". (The Catholic definition of deuterocanonical books excludes the two books of Esdras and the Prayer of Manasses.) The Church of England and other churches in the Anglican tradition continue to specify readings from the Inter-Testament books in their lectionaries; and hence bibles printed for use during worship in these churches must necessarily include these books.

These books came from the Greek version of the Old Testament called the Septuagint, the sacred text collection used by Greek-speaking Jewish communities, and by most of early and historical Christianity. They are included in the King James Bible, and all other vernacular versions of the Reformation era, but their canonical status was increasingly questioned by various Protestant traditions from the late 17th Century onwards. Since the early-19th century, the Inter-Testament books have tended to be rejected by Protestant churches, and most editions of the King James bible printed for personal use since then have omitted them. Israelite communities used the Greek Septuagint until about the 2nd century AD, but Orthodox Judaism does not recognize either the Inter-Testament books or the entire New Testament as part of its own sacred text collection, which is known as the Tanakh.

The King James Version is also known as the Authorized Version. In most of the world, it has passed out of copyright and can be freely reproduced. In the United Kingdom, however, it is still copyrighted and is subject to an eternal Crown copyright. Permission to publish in England and Wales can be obtained by following the guidance in A Brief Guide to Liturgical Copyright, third edition (RTF file); permission to publish in Scotland requires contacting the Scottish Bible Board.

Retrieved from "https://religion.wikia.org/wiki/Bible_(King_James)?oldid=278273"
Community content is available under CC-BY-SA unless otherwise noted.