In many Gnostic systems, the various emanations of God, who is also known by such names as the One, the Monad, Aion teleos (αἰών τέλεος "The Broadest Aeon"), Bythos ("depth or profundity", Greek βυθός), Proarkhe ("before the beginning", Greek προαρχή), the Arkhe ("the beginning", Greek ἀρχή), are called Aeons. In the different systems these emanations are differently named, classified, and described, but the emanation theory itself is common to all forms of Gnosticism. In the Basilidian Gnosis they are called sonships (υἱότητες huiotetes; sing.: υἱότης huiotes); according to Marcus, they are numbers and sounds; in Valentinianism they form male/female pairs called syzygies (Greek συζυγίαι, from σύζυγοι syzygoi).

This source of all being is an Aeon in which an inner being dwells, known as Ennoea ("thought, intent", Greek ἔννοια), Charis ("grace", Greek χάρις), or Sige ("silence", Greek σιγή). These are the primary roots of the Aeons. The split perfect being conceives the second Aeon, Caen ("power"), within itself. Along with the male Caen comes the female Aeon, Akhana ("love"). Complex hierarchies of Aeons are thus produced, sometimes to the number of thirty. These Aeons belong to the purely ideal, noumenal, intelligible, or supersensible world; they are immaterial, they are hypostatic ideas. Together with the source from which they emanate they form the Pleroma ("region of light", Greek πλήρωμα). The lowest regions of the Pleroma are closest to the darkness—that is, the physical world.

The transition from the immaterial to the material, from the noumenal to the sensible, is brought about by a flaw, or a passion, or a sin, in one of the Aeons. According to Basilides, it is a flaw in the last sonship; according to others the sin of the Great Archon, or Aeon-Creator, of the Universe; according to others it is the passion of the female Aeon Sophia, who emanates without her partner Aeon, resulting in the Demiurge (Greek Δημιουργός),[1] a creature that should never have come into existence. This creature does not belong to the Pleroma, and the One emanates two savior Aeons, Christ and the Holy Spirit, to save humanity from the Demiurge. Christ then took the form of the human Jesus, in order to be able to teach humanity how to achieve Gnosis. The ultimate end of all Gnosis is μετάνοια metanoia, or repentance, the undoing of the sin of material existence and the return to the Pleroma.

Aeons bear a number of similarities to Judaeo-Christian angels, including their roles as servants and emanations of God, and their existence as beings of light. In fact, certain Gnostic Angels, such as Armozel, also happen to be Aeons.[2]

The Gnostic Gospel of Judas, recently found, purchased, held, and translated by the National Geographic Society, also mentions the Aeons and speaks of Jesus' teachings of them.[3]

Valentinus assumed, as the beginning of all things, the Primal Being or Bythos, who after ages of silence and contemplation, gave rise to other beings by a process of emanation. The first series of beings, the Aeons, were thirty in number, representing fifteen syzygies or pairs sexually complementary. One common form is outlined below: 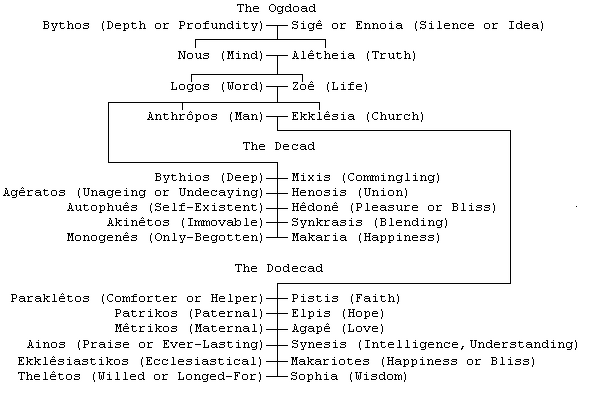 The Valentinian system was, until recently, only known through the criticisms of its opponents; however, the discovery of the Nag Hammadi library has given access to Valentinian texts, including sources that have been tentatively identified as written by Valentinus.

Tertullian's Against the Valentinians gives a slightly different sequence. The first eight of these Aeons, corresponding to generations one through four below, are referred to as the Ogdoad.[4]

According to Irenaeus,[5] the followers of the Gnostics Ptolemy and Colorbasus had Aeons that differ from those of Valentinus. Logos is created when Anthropos learns to speak. The first four are called the Tetrad and the eight are called the Ogdoad.

The order of Anthropos and Ecclesia versus Logos and Zoe is somewhat debated; different sources give different accounts. Logos and Zoe are unique to this system as compared to the previous, and may be an evolved version of the first, totalling 34 Aeons, but it is not clear if the first two were actually regarded Aeons.

According to Myther, "The total number of Aeons, being 32, reflects the similarity of the mechanism to the Tree of Life, which, as suggested in the Zohar, incorporates 10 Sephiroth and 22 paths interconnecting these 10 Sephiroth; while 10 Aeons are created during the first five generations from which come the other 22 Aeons later during the sixth generation."

The animated TV series Æon Flux draws its name and some of its iconography from Gnosticism, notably aeons (the two main characters forming a syzygy) and a demiurge.[6][7]